The Riksbank's assets and liabilities 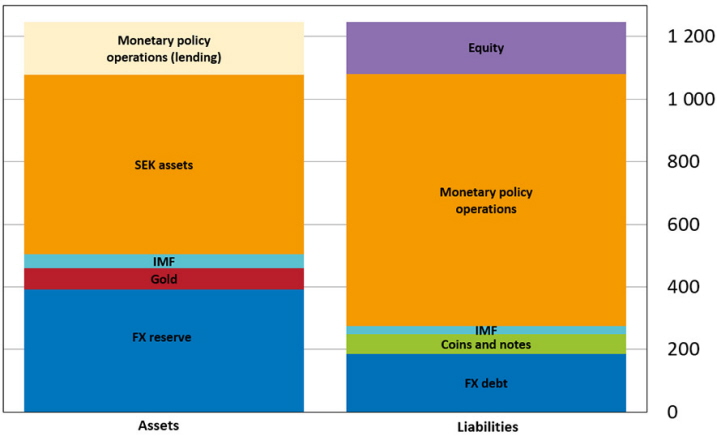 The gold and foreign exchange reserves – the Riksbank’s greatest asset

The gold and foreign exchange reserves make up a large part of the Riksbank’s total assets. This allows the Riksbank to offer emergency liquidity assistance in foreign currency and to influence the krona exchange rate by buying and selling currency. The reserves are also used when the Riksbank lends money to the IMF.

The monetary policy assets mostly consist of securities in Swedish kronor. This item has grown substantially since 2015 due to the purchases of government bonds initiated by the Riksbank at that time for monetary policy purposes. In conjunction with the coronavirus pandemic of 2020, this item has increased further as, in addition to Swedish government bonds, the Riksbank has also purchased Swedish covered bonds, municipal bonds and commercial paper. At the same time, monetary policy lending has been increased to alleviate the effects of the coronavirus pandemic on the Swedish economy.

Claims on the IMF arise when the Riksbank lends money to the IMF. The IMF, in turn, lends money to emerging market economies and countries in financial crisis.

The Riksbank’s other assets consist of the Riksbank’s premises at Brunkebergstorg, shares in the Bank for International Settlements (BIS) and other holdings.

The Riksbank’s financial liabilities mainly consist of the liability in SEK arising when banks deposit some of their liquid assets at the Riksbank. This item has grown substantially since the beginning of 2015 when the Riksbank started buying Swedish government bonds for monetary policy purposes, as well as in conjunction with the measures adopted in 2020 to support the economy during the current coronavirus pandemic.

The Riksbank also has liabilities in foreign currencies to the National Debt Office. These consist of US dollars and euros borrowed by the Riksbank from the National Debt Office in 2009 and 2012 in order to strengthen the foreign exchange reserves. The reason was that experience from the financial crisis in 2008-2010 showed that the reserves held by the Riksbank at that time had not been sufficient to cope with the crisis and hence guarantee financial stability and to fulfil commitments made to the International Monetary Fund (IMF).