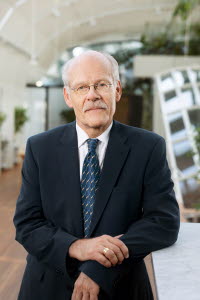 Stefan Ingves took up the post of Governor of the Riksbank and Chairman of the Executive Board on 1 January 2006 with a term of office of six years. Ingves term of office has been extended twice (6 years + 5 years) until 31 December 2022.

Press photo of Stefan Ingves can be found on the page Photos of members of the Executive Board.

Visit Speeches and presentations  to show all speeches of Stefan Ingves.

25/10/2018, Introductory remarks by Governor Ingves, panel discussion about "Imagine! Science, Knowledge, and Wisdom in the University of the Future", Åbo Akademi, on the occasion of Åbo University's 100 year anniversary.

5/6/2014, Finlands Finansinspektion, Helsingfors. Slides:
Implications of the SSM for the Nordic banking sector

The work agenda of the Basel Committee

Finishing the job: next steps for the Basel Committee

Limits to central bank objectives in a small open economy

Where to Next? Priorities and themes for the Basel Committee (link to BIS)

From ideas to implementation (link to BIS)

9/3/2012, Contribution to the Eurofi Newsletter
The importance of a robust liquidity framework (pdf)

Talk is Cheap - Putting Policies into Practice (link to BIS)

Economic Commentaries, no. 8 2008 - Stefan Ingves
Financial turbulence – light at the end of the tunnel after weekend meeting in Washington

Economic Commentaries, no. 7 2008 - Stefan Ingves
Give the IMF a stronger role in promoting global financial stability

Economic Commentaries, no. 2 2008 - Stefan Ingves
The IMF should sharpen its tools

Is there an optimal way to structure supervision?

Using international sound practices as a basis for banking reforms