Like many other central banks, the Riksbank owns gold. This is because one of the Riksbank’s earlier obligations was to redeem banknotes and coins in exchange for gold.

Nowadays, however, gold is a financial asset that, like the currency reserve, aims to ensure that the Riksbank can carry out its tasks. The gold can, for example, be used to fund liquidity support or foreign exchange interventions.

The gold makes the gold and currency reserve more stable

The Riksbank has concluded an agreement with a number of other central banks, the Central Bank Gold Agreement (CBGA), which places a limit on the amount of gold central banks may sell each year. This has been done to avoid sales having undesirable effects on the gold price.

On 31 December 2019, the Riksbank owned 125.7 tonnes of gold. The market value of the gold was SEK 57.5 billion at that time. The gold is stored with the central banks in the United Kingdom (the Bank of England), Canada (the Bank of Canada), the United States (the Federal Reserve Bank of New York), Switzerland (the Swiss National Bank) and at the Riksbank. Storing all of the gold in the same place would entail too much of a security risk, so the Riksbank stores the gold in different locations around the world. Almost half of the gold reserve is stored in the United Kingdom, where the world's largest commercial gold market is based. Holding it at the Bank of England allows a large part of the Riksbank’s gold to be converted at very short notice, should the need arise. 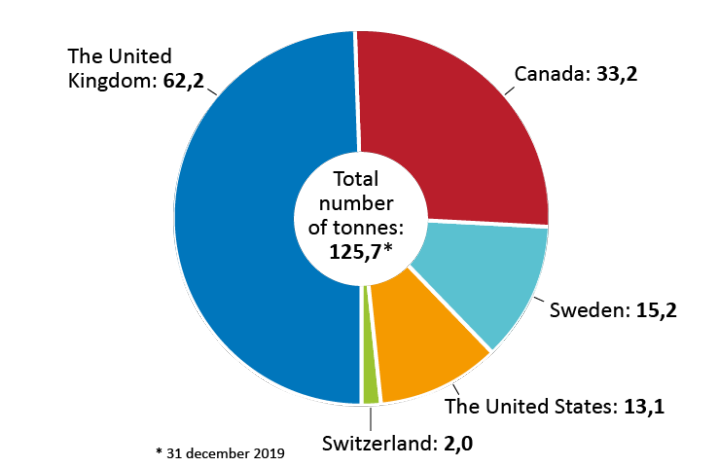 Questions? Visit our FAQ on kundo.se (opens i new window.