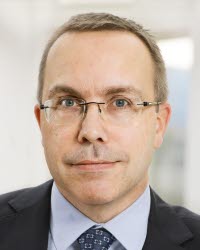 Ulf Söderström obtained his PhD from the Stockholm School of Economics in 1999. After spending four years at the Research Department of Sveriges Riksbank (the central bank of Sweden), he joined the Department of Economics at Bocconi University in Milan and the Innocenzo Gasparini Institute for Economic Research (IGIER) in September 2003.

Ulf's research interests include the formulation of monetary policy in closed and open economies; the effects of model uncertainty on monetary policy; and the relationship between monetary policy and the term structure of interest rates. He is a Research Fellow at the Centre for Economic Policy Research (CEPR), and was Associate Editor of the Scandinavian Journal of Economics from 2008 to 2019. He has published articles in several leading journals, including the American Economic Review, the Journal of Monetary Economics, and the Journal of Money, Credit, and Banking.

"Monetary policy under uncertainty in an estimated model with labor market frictions" (with Luca Sala and Antonella Trigari), Journal of Monetary Economics 55 (5), July 2008, 983-1006.

"New-Keynesian models and monetary policy: A reexamination of the stylized facts" (with Paul Söderlind and Anders Vredin), Scandinavian Journal of Economics 107 (3), September 2005, 521-546.

"Structural and cyclical forces in the labor market during the Great Recession: Cross-country evidence" (with Luca Sala and Antonella Trigari), in NBER International Seminar on Macroeconomics 2012, edited by Francesco Giavazzi and Kenneth West, University of Chicago Press, 2013.

"Re-evaluating Swedish membership in EMU: Evidence from an estimated model," in Europe and the Euro, edited by Alberto Alesina and Francesco Giavazzi, National Bureau of Economic Research and University of Chicago Press, 2010.

"How does the inflation target affect the economy?" (with Malin Adolfson), Sveriges Riksbank Economic Review 1, 2003, 50-75.

“The role of money in monetary policy at the lower bound” (with Roberto Billi and Carl E. Walsh), Sveriges Riksbank Working Paper No. 390, June 2020.

"The output gap, the labor wedge, and the dynamic behavior of hours'' (with Luca Sala and Antonella Trigari), Working Paper No. 246, Sveriges Riksbank, September 2010.

"The predictive power of the yield spread: Further evidence and a structural interpretation'' (with Carlo A. Favero and Iryna Kaminska), Working Paper No. 280, IGIER, Bocconi University, January 2005 (revised March 2005).

"Should central banks be more aggressive?'', Working Paper in Economics and Finance No. 309, Stockholm School of Economics, March 1999 (revised August 2000).