Press release Digital payment methods are squeezing out cash. New technology means that payment services are also offered by companies other than banks. Digitalisation makes payments easier, but also creates risks that need to be managed. The Riksbank therefore needs to keep up with developments and modernise both the central bank money and the Riksbank’s systems. These are the conclusions of the new report “Payments in Sweden 2019”.

Rapid digitalisation of the payment market in Sweden 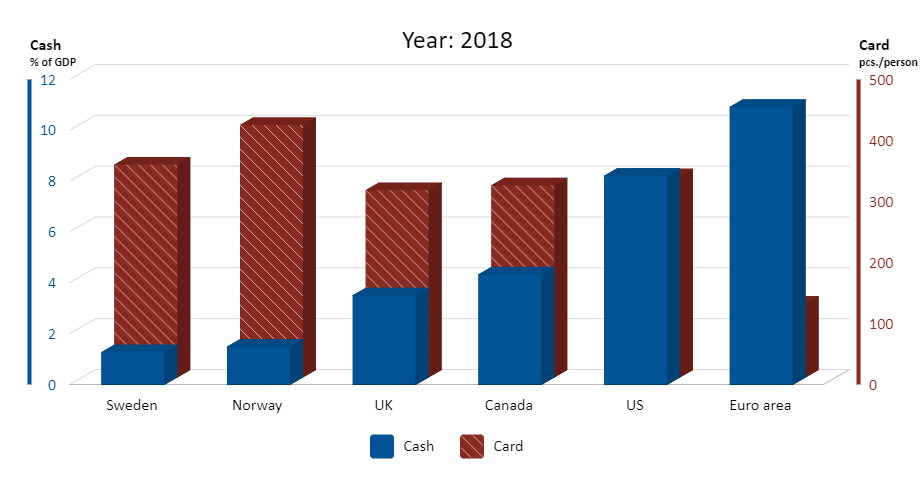 The payment market is going through major changes driven by new digital technology. It has become easier for most people to pay as it is now possible to pay by card or mobile phone virtually everywhere. At the same time, the use of cash is declining. Paying may therefore become more difficult for certain groups that are unable to use digital technology.

The majority of household purchases in Sweden are made by card. In ten years, the average Swede has doubled their card use. At the same time, payments in the form of instant, account-to-account transfers are increasing sharply (Swish is the most common form). For this type of payment to be able to continue to grow, the infrastructure for payments needs to be modernised.

Safe and efficient payments in Sweden

Even if digital payments are simple and convenient, the development places new demands on security. The number of frauds with stolen card details or identities has increased, for example. Crimes linked to cash, such as bank or cash-in-transit robberies, have simultaneously decreased sharply. Digitalisation has also led to falling costs for payments in society. From an international perspective, payments in Sweden are both secure and efficient.

The Riksbank is now investigating whether it would be possible to issue Swedish krona to the general public in electronic form, an “e-krona”. This would allow the general public access to the Riksbank’s money even in a cashless future. The Riksbank has also pointed out that something must be done to slow down the rapid decrease of cash usage.

The Riksbank is also analysing the possibility of modernising the Riksbank’s money and system for instant payments so that they are better adapted to a digital future. If the Riksbank ensures that it is simple and cheap to use its system for payments, there will be less need to use higher-risk alternatives. It is the Riksbank’s ambition that all payments will eventually go via the Riksbank’s system to safeguard the stability and efficiency of the market.

The report in brief

The report Payments in Sweden describes and analyses developments on the retail payment market and the services offered by the Riksbank. It is published once a year. The report summarises developments over the past year and presents the Riksbank’s assessments and policy in the area. The aim is for the report to contribute to a knowledge-based debate and make it easier for external parties to monitor, understand and evaluate the Riksbank’s policy on the retail payment market.

The report Payments in Sweden 2019 is the Riksbank's first entirely web-based report. The aim has been to create an accessibility-adapted report with an interactive content for a broad public.