Monetary policy April 2020: The Riksbank is supporting an economy in crisis

Press release The corona pandemic is hitting the world hard and restrictions to reduce the spread of infection are leading to widespread economic consequences. In recent weeks, the Executive Board of the Riksbank has taken decisions on a large number of measures. The aim has been to facilitate credit supply in the economy and counteract a rise in interest rates to households and companies as uncertainty in the economy increases. At yesterday’s monetary policy meeting, the Executive Board of the Riksbank decided to continue purchases of government and mortgage bonds up to the end of September 2020 and to leave the repo rate unchanged at zero percent. The Riksbank is prepared to continue to use the tools at its disposal to provide support to the economy and inflation. The combination of appropriate measures will be adjusted to economic developments.

The extensive restrictions imposed in order to limit the spread of the coronavirus have caused a sharp slowdown in activity in the global economy. This dramatic development has completely changed the economic prospects for both Sweden and the rest of the world. Many companies will be hit hard and many people will lose their jobs. In the current situation, however, it is difficult to say how deep and prolonged the economic downturn will be.

The changed economic conditions have been reflected in substantial movements on financial markets. At the same time, liquidity and market functionality have deteriorated. This has made it more difficult for banks and companies to fund their activities.

Comprehensive measures to bridge over the crisis

Over the last seven weeks, the Executive Board of the Riksbank has decided on a large number of measures, including offering banks loans of up to SEK 500 billion for onward lending to companies, buying securities for up to SEK 300 billion and offering loans to banks in US dollars. The aim has been to facilitate credit supply in the economy and counteract a rise in interest rates to households and companies as uncertainty in the economy increases. This will make it easier for viable companies to fund their activities, via either bank loans or financial markets, and to bridge over the critical crisis period. It will also create the conditions for a more rapid recovery once the economy starts to open up again. In the long term, this means that the scope for attaining the inflation target will also improve.

At the monetary policy meeting yesterday, the Executive Board decided to continue purchases of government and mortgage bonds up until the end of September 2020. The purchases are being made within the framework decision for purchases of securities up to SEK 300 billion during the year, which was adopted on 16 March.

The Executive Board also decided to leave the repo rate unchanged at zero per cent. It was not deemed justified at this point in time to try to increase demand by lowering the repo rate when the downturn in the economy is due to imposed restrictions and people’s concerns about the spread of infection. However, this does not rule out the possibility of the interest rate being cut at a later date if this is deemed an effective measure to stimulate demand and support the development of inflation in the recovery phase.

Although future economic developments are extremely uncertain, everything nevertheless indicates that monetary policy stimulus will be needed in the form of low interest rates and a large amount of liquidity for the foreseeable future. The combination of measures deemed appropriate is constantly evaluated and will be adjusted to economic developments.

The Government, the Riksdag and other authorities have implemented a long series of historically extensive measures. The Riksbank’s measures are a complement to many of these, by supporting the objectives of the general economic policy.

Despite the comprehensive measures both in Sweden and abroad, the economic consequences of the pandemic will be considerable. The consequences for the economy will vary depending on how long the spread of infection continues and on how long the restrictions implemented to slow it down are in place. The Riksbank has therefore chosen to describe possible developments in two scenarios instead of in one detailed forecast.

In both scenarios, production falls sharply to begin with, and more than during the financial crisis. Sharply falling oil and electricity prices will contribute to low inflation this year. The assessments of inflation are more uncertain than usual, but it is reasonable to assume that inflation will approach the target once the economy recovers. The scenarios are illustrated in the Monetary Policy Report and in the tables below. 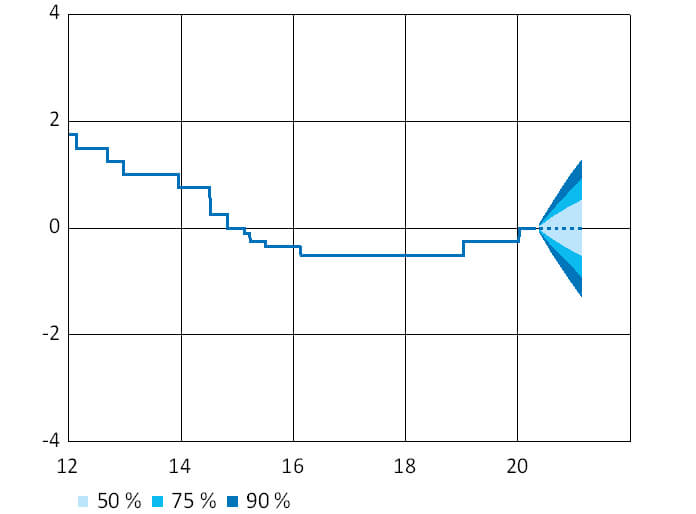 The decision on the repo rate will take effect from 29 April. The minutes from the Executive Board’s monetary policy meeting will be published on 11 May. More information on the Executive Board's decision on bond purchases can be found in a separate annex to the minutes on riksbank.se. A press conference with Governor Stefan Ingves and Jesper Hansson, Head of the Monetary Policy Department, will be held today at 11.00 at the Riksbank. Press cards must be shown. The press conference will be broadcast live on riksbank.se.

Owing to the coronavirus, the following applies to visitors to the Riksbank:
You must be in good health and have been free of symptoms for at least two days. We have removed many of the seats from the press conference room, so a maximum of two people from each editorial office may attend. Media who are unable to attend physically may call in by telephone. In that case, please contact our Press Office, tel. +46 (0)8 787 02 00.