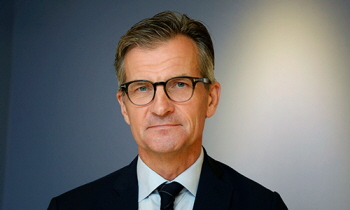 "We are very pleased to be able today to present Erik Thedéen as new Governor of the Riksbank and a highly qualified replacement for Stefan Ingves, whose mandate expires at the end of the year. The General Council is unanimous in this appointment”, say Chair of the General Council Susanne Eberstein and Vice Chair Michael Lundholm in a joint comment.

Erik Thedéen has been Director General at the Swedish Financial Supervisory Authority since 2015, and has a long and solid professional background in the financial sector in Sweden and abroad. He has a degree in Economics and Business Administration from the Stockholm School of Economics.

"Erik Thedéen has long and broad experience of financial markets. He has previously served as Deputy Director General of the Swedish National Debt Office, CEO of the Stockholm Stock Exchange and Managing Director of KPA Pension. He has previously also been State Secretary at the Ministry of Finance. Mr Thedéen is currently also Vice Chair of the European Securities and Markets Authority, ESMA, and Chair of IOSCO’s Sustainable Finance Task Force. Erik Thedéen's deep and broad experience and great commitment to financial issues as well as his experience in managing financial authorities and organisations make him well suited to become the new Governor of the Riksbank from the beginning of next year,” say Susanne Eberstein and Michael Lundholm.

Erik Thedéen has been appointed for a term of office of six years. He will take up his post on 1 January and will thus take part in the monetary policy meeting in February 2023. Prior to his appointment, Mr Thedéen attended a hearing of the General Council of the Riksbank.

The Executive Board of the Riksbank consists of six members, who are appointed for a term of office of five or six years.

A press conferences with the Chair of the General Council Susanne Eberstein, Vice Chair Michael Lundholm, and Erik Thedéen will be held today at 15.30 at the Riksbank, Brunkebergstorg 11. Press cards or the equivalent must be shown to attend. The press conference will be broadcast live at riksbank.se.